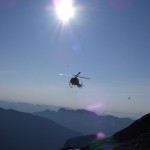 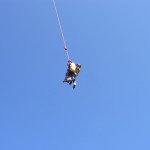 On Saturday September 10, 2011 Ridge Meadows SAR was requested by the RCMP to find a male hiker in Golden Ears Provincial Park.  This hiker separated from his group at the emergency shelter, while they continued to the summit and he remained nearby.  On their return, their friend was no longer there and they continued to the trail head expecting him to be there.  He was not, and a search was initiated.

Ridge Meadows SAR requested mutual aid assistance, as they were already in the field and had already spent the entire day working on another task.

1st page came in on Saturday night at 22:31 – request for 4-6 trained and experienced members in steep, rugged mountainous terrain needed for early Sunday.  On scene were Ridge Meadows (Maple Ridge), Coquitlam, North Shore, RCMP Air 5 and  Talon helicopters on saturday morning. Most of the Ridge guys had been out all night so they left once we arrived and there were only a few ground members left.  The five of us arrived at the Woodlot LZ at Alouette lake on Sunday morning and were briefed, given tasks and flown into the high alpine right next to the Golden Ears shelter.

The team of four completed the downclimbing of four southern creek drainages and found no sign of the subject so we asked to be picked up off a rocky ledge by talon and re-assigned.  We hover entered Talon and lifted off to await a new task.

While we waited I asked the pilot to fly to the northern side of the ridge that had several steep drainages that went out towards Pitt Lake and do an air re-con of all four drainages by sweeping back and forth across the slope while doing a slow descent. On almost our very last sweep across the slope, just before I was going to call it off, Darren Timmer spotted a person in the thick trees in a very steep area. It took several minutes of searching by the rest of us before all four of us and the pilot had eyes on the subject, and we confirmed it was him from his picture…plus the fact he was madly waving at us. Once we got a GPS location we asked the Air 5 pilot to come over and get eyes on the subject, to make sure we had a reference point, so we could fly off to insert a ground team further up slope as there were no spots anywhere to land or hover exit.

The pilot attempted to land in a clearing 500m up the slope but he had a full load of fuel plus four searchers and gear on board so he had to land up the shelter LZ and have one member, Steve, exit with his gear. The remaining three, Bill, Darren and Al, then were inserted at the lower site where we dumped some of gear we felt would not be needed.  The three of us hiked, slid, downclimbed through some dense undergrowth and arrived with the subject in approx 30 minutes with the aid of Talon staying in hover over the subjects location.

After assessing that the subject was not injured we discussed our exit options which could  be to hike / climb him back to the upper heli spot which we felt would take approx two hours.  Given that the subject was exhausted from being up for 24 hours, it was a very hot day so dehydration was a real  danger and once we committed to the hike / climb up we would could be stuck in an area that had no extraction options if he collapsed so we decided to request a HETS extraction for all of us from the only opening in the canopy where we were.

The dehydration / exhaustion fear was confirmed later by Steve after he did the short hike down from the ridge to the gear we cached so he could carry it back to the helipad and he stated he was absolutley exhausted himself once he hiked back up.  The subject and all three members were HETS out to the shelter LZ then we were all flown back to the wood lot lz for debrief.

Lots of totally un-prepared onlookers at the shelter so we half expected another call.

There were lots of hikers on the hills this weekend.
Be safe, carry the 10 Essentials with you on your next hike.