Coquitlam SAR was involved in two searches this Remembrance Day.

The first search started the night before when the team was contacted by Coquitlam RCMP to look for two missing boaters on Pitt Lake. Ridge Meadows SAR was asked to assist immediately, and to bring their new boat. RCMP Air 1 was also brought in, with the FLIR to help for night searches. We also put Ridge Meadow’s newly refurbished Raven repeater to good use for communications up and down the lake.

Air 1 located a camp fire about 12km from the head of the lake up the Pitt River, and ground crews attempted to reach that location through the night but were stopped by high water in the Pitt River. When day broke, Talon Helicopterswas brought in to access that position. Two team members assisted the subjects to winch their boat off the gravel bar they were stranded on, and the first search was complete. 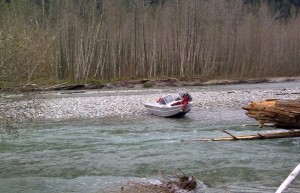 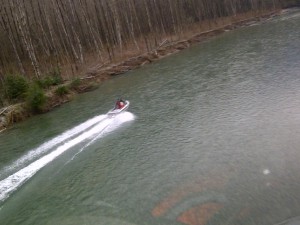 Boat no longer stranded, on their way home.

At 15:45 that afternoon a second call came in from BC Ambulance to rescue an injured mountain biker on the “Slayer” trail on Burke Mountain. The subject was reported to have a fractured leg, and her two companions were keeping her company. Twelve SAR members, including two who had been out the previous night, responded with hypothermia, first aid equipment and a stretcher. Two of the team’s paramedics were in attendance and treated the subject and her two friends. She was “packaged” in a hypothermia bag, and carried out by stretcher to a waiting ambulance just as night fell and the rain began to fall. The trail was steep enough that ropes were required to transport her safely.

It’s notable that the temperature at the end of the task was 2 degrees at the base of Burke Mountain (500m) which means it was probably snowing on top (1100m) With cold weather on the way and shorter daylight hours we recommend all hikers, bikers and backcountry users be prepared for emergencies by packing the 10 essentials and including some rain gear.