Coquitlam SAR has been called on rescues twice in the past week, leading up to the Canada Day long weekend, the busiest SAR weekend of the year.

On Sunday June 23rd around 15:00, the team was called to rescue a hiker with a badly sprained ankle on the Diez Vistas trail. The team used the YourLo.ca/tion service to pinpoint the subject’s position on the trail, and dispatched ground SAR groups to that location. Once on scene, it was decided to ask North Shore Rescue to long line the subject out.

This rescue marks the third time this year where a long line was required. Coquitlam SAR has funded and developed the capability for long line rescue in-house, but is still waiting for delivery of the helicopter rigging equipment required.

On Saturday June 29th, around 16:00 Coquitlam SAR was called to rescue a pair of hikers in the Lindsay Lake area on Eagle Ridge. The subjects had lost the trail, and were able to provided GPS coordinates using their smart phone. A team was sent to their location by helicopter, provided first aid for a sprained ankle, and flew the two subjects back to Buntzen Lake. Teams responding to Eagle Ridge noted the trail had many patches of deep snow in some locations, and some areas were very swampy with meltwater.

Some pictures of the rescue provided below.

In both of these rescues the subjects called for help as soon as they realized they were in trouble, allowing the team plenty of time to perform the rescue before dark. It’s also worth nothing that both incidents required the use of air support, and benefited from the use of a smart phone with a GPS.

Remember to always conserve batteries on your phone; without batteries a smart phone is a dumb phone. 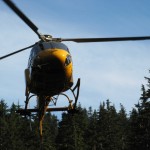 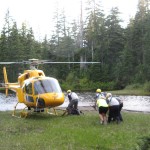 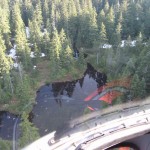