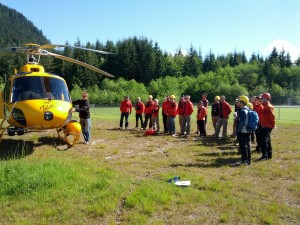 Coquitlam SAR was busy this week with two different rescues in the Eagle Ridge area, just two weeks after an overnight rescue of three hikers in the same place.

A few hours after our helicopter operations training, the team was notified by Coquitlam RCMP at 5:30 of a stranded hiker near the Swan Falls trail.

The team activated a helicopter, and cell phone contact was established. We learned that two groups, for a total of 6 hikers, had lost the trail due to snow on the ridge top. The hikers had found their way back to the trail, and were descending. SAR teams hiked up Swan Falls trail, met the hikers and escorted them to the trailhead.

In a second call on Tuesday at 3AM, Coquitlam SAR was again asked by Coquitlam RCMP to search for four stranded ATV drivers on Eagle Ridge in the area around Cypress Lake. The subjects were stranded because their vehicle, an Argo ATV, had broken down. A single team of two SAR members drove Coquitlam SAR’s own Argo Avenger ATV, which seats 6, and accessed the subject’s location. The position was confirmed using the YourLo.ca/tion application, software that uses a smartphone GPS to pinpoint the coordinates of a lost person, and written by a Coquitlam SAR team member.

The SAR members managed to restart the subject’s Argo, and proceeded to escort them down the mountain.

In the first rescue we would like to thank the subjects for calling for assistance early, this helps us resolve a search quite quickly. In the second search, the subjects must be congratulated for not attempting to hike down the mountain in the dark; doing so is what usually leads to becoming lost, or injured.

Finally we’d like to remind people that there will be snow on Eagle Ridge until July, and that night time temperatures can be quite cold on the ridge, which reaches elevations of 1200m at points.