At 17:30 on July 14th, Coquitlam SAR was asked by Coquitlam RCMP to assist the Canadian Coast Guard (CCG) (Coal Harbour) and Royal Canadian Marine SAR (RCM-SAR Station 2) in the rescue of an injured 29-year old male at Granite Falls on Indian Arm, a part of our response area. He was reported to have fallen several meters, and was injured though stable.

The team met the RCMP Rural division RHIB at Belcarra park with 6 rope rescue/mountain rescue members and equipment and continued to Granite Falls in communications with CCG Hovercraft Siyay which had also responded, carrying BC Ambulance (BCAS) paramedics from Cates Park. En route, knowing that most calls in this area involve long line rescue, Coquitlam SAR asked North Shore Rescue to assist with their HETS crew. Coquitlam SAR also activated Talon helicopters with a SAR manager to fly in from Vancouver Airport.

Luckily North Shore Rescue was available, having completed a task earlier in the day, and responded rapidly to the scene and long lined the subject, who had possible spinal injuries, to the hovercraft. Siyay transported the injured subject back to Cates park where BCAS took over.

A multi agency rescue like this one requires much coordination, and the performance of professional and volunteer rescuers was quite impressive to witness. No fewer than 6 agencies were involved in this rescue, two different coast guard bases, and two helicopters.

This rescue once again illustrates the need for a long line rescue capacity within Coquitlam SAR. 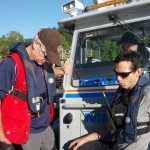 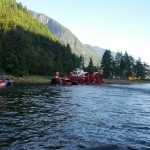 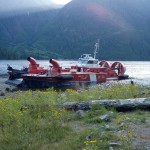