On Wednesday, October 2nd, members of Coquitlam SAR were presented with the Port Moody Police Department Chief Constable’s Letter of Commendation for their actions as the lead SAR agency in the search and rescue of two missing developmentally disabled women near Sasamat Lake in August, 2012. 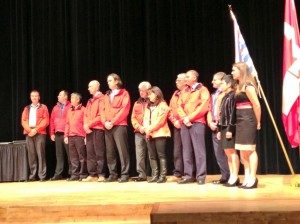 The text of the commendations reads

On Thursday August 2nd, 2012 at 17:30, Coquitlam SAR was asked by Port Moody Police to search for two missing 20 year old women with special needs in the Sasamat Lake area, beginning a search that ultimately lasted in excess of 80 hours, involved 25 agencies, hundreds of volunteers, and 1200 person hours.

By the time Coquitlam SAR was mobilized the women had been missing for six hours. By 7:00 pm several teams were already searching the lake and the trails connecting to other areas. By 11:30 pm, Judy, the first subject, was found near the saddle on the Diez Vistas trail, and the search teams thought that Joy would be found quite soon after.

This was not to be the case. Judy’s recollection of events was unclear and the searchers were unable to determine where she and Joy separated in order to help focus the search. For the next two days Coquitlam SAR led the search around the lake, brought in the RCMP dive team, used helicopters and dogs, and began grid searching; a particularly thorough and difficult search technique that required a lot of your members to bushwack in the August heat. The Royal Canadian Marine SAR searched the coastlines, and members of the family public and public assisted throughout.

On Sunday August 5th the last essential piece of information came when Judy told advised that she had not been walking alone for very long when she was found. 4 and a half hours later you located Joy, 76 hours after being reported missing.

This search represented one of the most memorable searches for Coquitlam SAR and emotions ran high when, over the radio, cam the broadcast “I’m with Joy and she’s talking up a storm.”

For assisting the police in a protracted life-saving effort, you are awarded the Chief’s Letter of Commendation.

Coquitlam SAR would again like to recognize the efforts of all of the SAR volunteers involved in this search which included members from Lions Bay, Surrey, North Shore, Chilliwack, Mission, Ridge Meadows, Central Fraser Valley, Kent-Harrison, Squamish and Sunshine Coast.

We’d also like to recognize the contributions of the Sasamat Volunteer Fire Department, convergent volunteers and the members of the Douglas College and Challenger Baseball Team who devoted many hours to this search.

Many of our SAR members grew up or currently live in Port Moody and are proud to be able to serve that city, and the other communities of the Tri-Cities, Anmore, Belcarra, Burnaby and New Westminster.