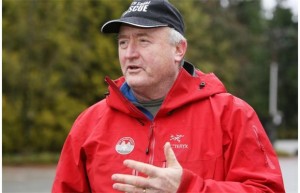 The British Columbia SAR community was shocked yesterday evening at the news that Tim Jones, veteran SAR member, team leader of North Shore Rescue, and public advocate for SAR had passed away on Mount Seymour while returning from a hike to the team cabin.

The news raced through the BC SAR community, with SAR teams and individuals reacting with shock that Jones, a constant and tireless search and rescue leader, was gone.

Coquitlam SAR, covering an area adjacent to the North Shore, has operated very closely with NSR for many years. Newer members of our team will not have known a time when Tim was not the public face of their team. We have called on North Shore Rescue for assistance under “mutual aid”,  and have supplied assistance in return, often mingling the members of our team and command staff with theirs in order to carry out a SAR task. Our close relationship makes this loss even more striking.

Tim was a pioneer of the helicopter rescue long line technique, bringing it to volunteer SAR and making it an accepted rescue tool. For this effort alone, SAR members and the people we rescue have Tim to thank for our ability to rescue people using this technique throughout BC. Tim went to great lengths to make members of Coquitlam SAR a part of this training program, even making two members of our team a part of his program.

North Shore Rescue’s impressive and professional record in training, and responding to thousands of incidents over Tim’s years on the team stands as a tribute to his efforts and skill.

The SAR community is one team today, one team who has lost a brother, friend, mentor, and a leader.

The members of Coquitlam SAR would like to join the rest of the SAR community in offering our deepest and most sincere condolences to the family, friends, and fellow team members of North Shore Rescue. Tim was a true hero, mentor, and friend to the SAR community and he will be greatly missed.

One Response to Tim Jones