At 5:30 pm on Sunday February 2nd Coquitlam SAR was notified by Coquitlam RCMP of a pair of lost hikers on Eagle Ridge above Westwood plateau in Coquitlam.

The team responded, staging out of Town Centre Fire Hall. Cell phone contact with the pair, brothers aged 16 and 18 years old, was very good. They were in good spirits, but very lightly dressed. They reported their intended route, and indicated where they had lost the trail before reaching Cypress Lake. The brothers had called for assistance as soon as they realized they were lost, and both had cell phones with good battery life remaining.

Seventeen SAR members were sent up the mountain via several routes, via old roads, mountain bike trails, ATV trails and hiking routes. The subjects did not know where they were but were able to give the team clues. Teams fanned out in the maze of lakes, trails and roads at the top of Eagle Ridge, being shuttled up and down the mountain by our 4×4 drivers and the team’s Argo 8 wheel drive ATV.

At around 10:00 a team found a pair of tracks matching the subject’s description, and by 10:20 had made voice contact with them. They pair were found at 10:50, and after giving them food and water, they began the trek out. 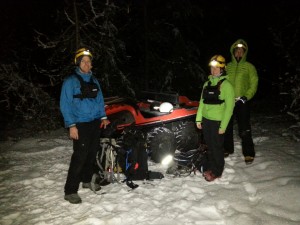 It was a particularly exciting day for the team’s new members in training (MITs). Coquitlam SAR recruited 15 new members late last year, and they began training in December. Several of them were taking a wilderness first aid course on Sunday, and most of the rest were training in Avalanche skills on the Coquihalla all day. For several MITs this was their first SAR experience.

The subjects were driven out of the field and reunited with their family, and the rest of the SAR team was back by 1:30 AM Monday morning.

We’d like to remind people to take the 10 essentials with them at all times. These 10 things are very light and can make the difference between a small incident and a tragic outcome. Remember to call for help early if you know you are lost, it makes our job easer!