15 members of Coquitlam SAR and two Coquitlam RCMP members spent the evening at Buntzen Lake last night rescuing two lost hikers on the Swan Falls trail. The pair, both young males, had set off at 2:30pm from the parking lot after researching the trail online. They ran out of water, and after summiting the 1200m peak, were caught by nightfall on the way down. 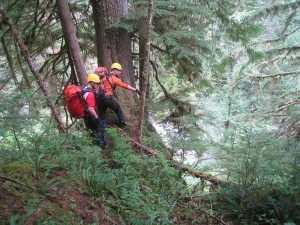 Coquitlam SAR was called at responded at 23:30 with several members. The lost hikers had managed to call for assistance before their cell phone batteries died, and had indicated they were on the Swan Falls trail. Upon driving to the trailhead, and calling out, voice contact was made immediately. Three SAR members ascended to their location several hundred metres up the trail, and escorted them out. The subjects were dehydrated, but otherwise in good shape.

Simple errors in judgement contributed to this rescue;

However, the two subjects did the right thing by calling for help, and then staying in one place until rescue arrived. If they had continued moving, as we have experienced in many rescues in this area, subjects routinely injure themselves, and can get into very difficult terrain. This rescue concluded at 02:30.