On September 1st at 15:00 Coquitlam SAR was activated by BC Ambulance for 62 year old female hiker with a sprained or broken right ankle, described as being on the west side of Buntzen Lake. The team alerted the BC Hydro wardens office, and responded to the lake. By the time members arrived, one of the hiker’s companions had hiked out, and the wardens had sent in some of their staff with equipment from our SAR cache to the subject’s location.

Since the hiker was on the Buntzen Lake tail, It was determined that the simplest method of transporting her was a few hundred metres of stretcher carry, followed by boat transport to the boat launch. Ten Coquitlam SAR members and four wardens were transported by boat and a short hike to the subject’s location, immobilized her ankle, and executed the rescue as planned. The hiker was transferred to BC Ambulance and taken to the hospital for X-rays. 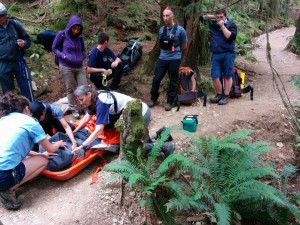 A follow up call with the subject indicated that the ankle was indeed broken, and requires surgery. A reminder that even a simple rescue of a suspected sprained ankle can be more serious than it appears. We’re glad the subject and her friends called for help, as attempting to walk out would have resulted in further injury. We wish her a speedy recovery.