Rescue of Hiker and Dog at Buntzen Lake 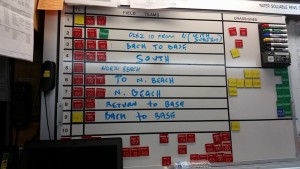 Coquitlam SAR was paged by Coquitlam RCMP at 8:30 Monday evening for a missing hiker and dog at Buntzen Lake.

The 57 year old missing man had been walking his dog on the Diez Vistas trail when he became lost, calling for help early in the evening. His family, residents of Anmore and living nearby, attempted to reach him themselves before calling 911 for assistance. The RCMP were able to “ping” his cell phone before the battery died, placing him at “Vista 10”, however a text message he sent to his family earlier in the evening brought some doubt as to this location, indicating that he may have moved.

Consequently, 23 members of the team were deployed to trails around Buntzen Lake to cover various possible routes. Cold weather and travelling at night often lead to injury, so a SAR response has to take these things into account.

Thankfully, the missing man was located at midnight, exactly where the cell phone location indicated he would be, huddling with his dog to stay warm. He hiked out with Coquitlam SAR members, reaching the trail head at one AM.

Coquitlam SAR would like to remind people that the trails around Buntzen Lake can be serious. Always take the 10 essentials with you when you go for a hike, even in “your own backyard”.