Coquitlam Search and Rescue was activated at 12:30 on Sunday July 24 to locate and rescue a subject who had been hiking with two friends on Eagle Ridge near Buntzen Lake and who had slipped and injured her shoulder.

Although cell phone coverage is most often lacking in the backcountry, this group was lucky to to be able to get a
call out. Using the cell phone location service developed by Coquitlam SAR members, the injured hiker’s position was determined to be Spirit Pass, about 500m south of Mount Beautiful on the Halvor Lunden Trail. Their location was rapidly confirmed via an overflight by Talon Helicopters.

Given the steep terrain and the nature of the injuries, the team decided to extract the subjects using long line rescue. Helicopter rescue technicians and a team paramedic were inserted about 50 vertical metres below the subjects. The members made their way to the subjects where an assessment indicated that the injured subject had a dislocated shoulder, and should be flown out in a stretcher rather than in an evacuation harness. Two more rescue technicians were flown in with the stretcher along with the team doctor. An area was cleared near the subjects so that a pickup could be done from the site.

The injured subject was packaged and flown out, followed by the other two hikers and remaining members in two further flights.

Some photos from the rescue are included below. 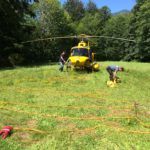 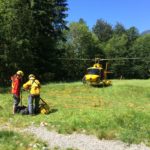