Coquitlam Search and Rescue was activated by Coquitlam RCMP at 11:30 PM on Saturday July 30th to search for a missing hiker in the Eagle Ridge area near Buntzen Lake.

The missing subject, a 21 year old male from Coquitlam BC was reported overdue. His last known location was a set of coordinates on the Dilly Dally trail on Eagle Ridge which were relayed to by phone to a relative at 6:45 am on Friday July 29th.

16 Coquitlam SAR members responded Saturday night searching until just after daybreak. At 7:45 am, the subject was located by helicopter at 1900m (570m) in steep, rugged and inaccessible terrain on the east side of Eagle Ridge in the Coquitlam Watershed . Stranded at the top of a cliff, and over 600m from the top of the ridge he was in a precarious position but looked to be in good condition.

Our long line rescue team responded, and with Talon Helicopters pilot Kelsey Wheeler flying, inserted rescue tech Nick Zupan to asses the subject’s condition. He was uninjured, but hungry and dehydrated, and was extracted by long line at approximately 9:40 am. 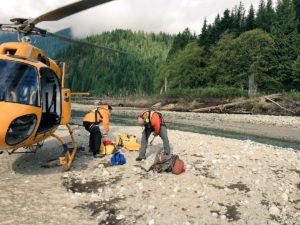 After a short debrief, it turned out our missing hiker has a pretty amazing story to tell. He left home on Wednesday, intending to camp on Eagle Ridge for a few days, starting out on the Dilly Dally trail north of Buntzen Lake. He told the team that he had spent the past three days stranded at the top of a cliff above Coquitlam Lake, unable to go up or down, and was down to very little food and less water.

The area he was hiking in is rugged and unforgiving. The route is approximately 25km long, has over 1100m of elevation gain (not including downhill), and usually takes 8 hours to traverse from north to south. The top of Eagle Ridge is the same elevation as the North Shore mountains, but without the easy access to roads and other facilities. The southern portion of the ridge is dotted with small lakes.

The East side of Eagle Ridge is in the Coquitlam Watershed and has no cell service so Alec was unable to call for help by that means. In addition, because it’s the the watershed the area is closed to hikers and it was very unlikely that a member of the public would have spotted him.

Alec’s adventure came to a happy conclusion because he had told a relative where he was going and his general route, and had left instructions for them to call Search and Rescue.

As an interesting note, SAR members who searched for Alec though the night discovered other people camping on the ridge top this weekend. As the top of the ridge was blanketed in overcast clouds, they had to hike the 25km trail to get home this morning. If the missing hiker had been higher on the ridge it is unlikely we would have spotted him from the air until later this afternoon.

Coquitlam SAR would like to thank the various media outlets that assisted us in the early hours of the search when we were asking for public assistance in case anyone had spotted the subject and could give us a last known position.