One Saturday October 2nd, while 6 Coquitlam SAR members were assisting North Shore Rescue with a large search for a missing hiker, we were notified by BC Ambulance of an injured hiker on the Diez Vistas trail near Buntzen Lake.

The hiker reported that her ankle was broken, and she was in quite a lot of pain. She and her hiking partner were also lightly dressed and becoming cold.

The team responded, activating Talon Helicopters and scrambling the long line rescue team. SAR members responded to Buntzen Lake, with several hiking in to the subject’s location – determined to be the Punta Del Este lookout (East View) by using the the team’s Cell Phone Location software. The long line rescue group rigged for a rescue while the ground crews located and stabilised the subject. 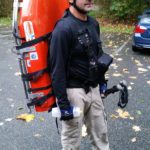 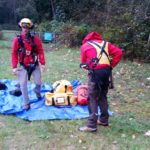 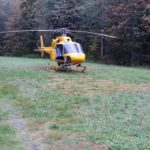 The subject’s injury was treated, she was long lined out without incident, and transferred to BC Ambulance. Her companion hiked out with the ground crew.

Previous rescues of this type – the second broken ankle on the Diez Vistas trail in two weeks – would have resulted in a long and gruelling stretcher carry over rough terrain and steep trails. The subject would be uncomfortable for hours and the team would require approximately 20 members to carry her for up to 4 hours.

With Coquitlam SAR’s development of the long line rescue capability we’ve cut down on rescue times and made things much more comfortable for the subject, as well as expending less volunteer time and team resources for rescues like this. In addition, we were able to rescue a subject without the use of outside resources which were committed to another search in the area.

With the increase in call volumes in the southwest region we believe that the development of this rescue tool will prove useful to our area and adjacent response areas in the years to come. 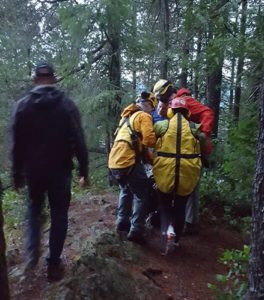 One Response to Medical Rescue on the Diez Vistas trail