Coquitlam SAR was activated by Coquitlam RCMP for 3 lost hikers believed to be on Burke Mountain yesterday at 5:30 pm. 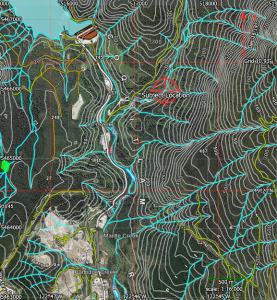 Several team members had been involved in training in the area earlier in the day responded immediately and began investigating the report. The subject, three teen girls aged 17 to 18, had called 911 and asked for help. They reported that they had begun their day on Burke Mountain hiking the Woodland Walk trail to Sawblade falls, and were sitting next to a river. The RCMP had “pinged” their cell phone and derived a location near the banks or Or Creek in the Coquitlam Watershed.

With the assistance of Metro Vancouver Watershed staff we sent Coquitlam 4 (our 4×4) and Coquitlam 5 (our new UTV) into the watershed up the Or Creek branch while another field team met Talon Helicopters at Town Centre Firehall helipad. Communications with the subjects was intermittent, but once the helicopter was in the air we were able to relay to the pilot when the subjects had him in view. 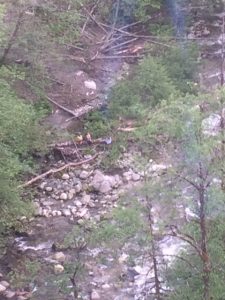 Subjects on the banks of Or Creek

Our rescue team leader opted to to have the team dropped off downstream from the three teens and make their way upstream to their location. The three were escorted across Or Creek, and brought to the waiting rescue trucks on the access road. 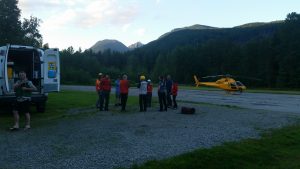 Team mustered at Upper Coquitlam River Park with Coquitlam Mountain in the background.

The subjects were brought out to Upper Coquitlam River Park and interviewed by our SAR management team.

The three hikers reported that they had used the internet to find a hike in Coquitlam. They had taken minimal equipment and had planned for just an hour or so of hiking to get to a waterfall. Unfortunately, as other SAR teams have recently reported, the internet isn’t always the best place to get information on a hike. In this case, in addition to directions to the trailhead, these three hikers would have benefited from taking a map, and most of the other 10 Essentials.

They also didn’t leave a trip plan. If they had not been able to make a phone call, Coquitlam SAR would possibly have been notified after dark, and would have started the search on the other side of the mountain. Although it’s likely we would have found the subjects it would have resulted in a long, cold night for the three hikers.

We’d like to stress that hiking on Burke Mountain is a wilderness experience, and requires more preparation than just a few searches on the internet. The trails on Burke are made up of old logging roads, mountain bike trails and hiking trails and can be difficult to follow without a map. If you become lost the best thing to do is to always retrace your steps. Going downhill when you don’t know what’s there is always the worst thing to do.

Thanks to Metro Vancouver Coquitlam Watershed staff, Talon Helicopters and the Coquitlam RCMP for their assistance, and a special thanks to the West Coast Radio Control Aircraft Flyers as we disrupted their use of Upper Coquitlam River Park.