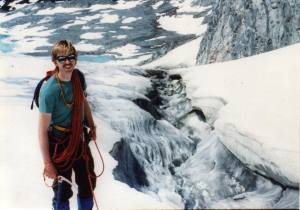 Dave Timewell was a member of both Ridge Meadows SAR and Coquitlam SAR. In the words of life member Dan Cook,

He participated in numerous SAR events with both teams. Some of the old timers from Ridge may have some information as well. He went to the Himalayas’ twice as I recall, perhaps more not certain. Dave and I served on the steering committee for High Angle Rescue for the Fire Service in B.C. and was on his way to becoming one of the group of the first Fire Fighter High Angle Instructors in B.C. at the time of is death. Dave also bicycle raced when he was younger and would stay in shape by bicycling 50 miles a day or more on occasion.

He was married to Wendi Forste (Not sure of the spelling) in the 80’s Dave and Wendi built a house on Sylvan Place (just off of Chilko) where Dave installed a climbing wall on the North Side. He was also into photography and took pictures during his climbs, some of which were published. He climbed a number of peaks, including Baker, Rainer, the Golden Ears and Coquitlam Mtn. closer to home. I was able to travel with him to Coquitlam, Baker and Wedge and probably would not have summited Wedge without Dave’s encouragement (Got a bit of altitude sickness at about 8,00 ft).

Dave enjoyed being a firefighter and we worked together at #4 hall for a few years where we would often go into the SAR trailer there and set up some type of hauling system or traverse when things were a bit slow around the station. Remember Captain Al Blake watching us Jumar up a rope and asked us to teach him how. When Al reached the top Dave suggest we go for coffee, but then Al convinced us to show him how to get down first.

Dave went on to work at 5 hall after with Pete Drummond who claimed that he was stationed there so long that he was the only one that knew how to work the light switches in the place. When Pete went on holidays Dave rewired the switches. 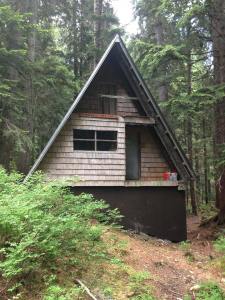