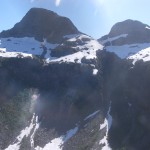 In response to an overdue hiker in the Tingle Peak area Ridge Meadows SAR initiated a search on September 2, 2011. Assisting in the search were teams from North Shore, Central Fraser Valley SAR and Coquitlam SAR.

On Friday afternoon Ridge Meadows was asked by the RCMP to respond to an overdue hiker in the Tingle Peak area.  The solo hiker was three days overdue. Based on a text message RM SAR was able to determine that Tingle Peak was his last known position. This location is just across Pitt Lake from last week’s Debeck creek task. The upper reaches of Tingle are incredibly difficult terrain, ringed with steep cliffs and very narrow drainage’s

Kelsey Wheeler of Talon helicopters was called in to provide support.  Ridge Meadow’s boat was also used to transport teams and act as a radio relay for teams inside of the valley. That afternoon teams on the ground had located what appeared to be the hiker’s inflatable boat and gear cache at the beach. Ground teams continued the search until nightfall, when it was too dark to search effectively. One team from Ridge Meadows SAR and one team from Coquitlam SAR spent the night on the trail, as they could not be extracted by helicopter at night.

The following morning, more teams were sent out to broaden the search.  SAR members located the subject while being transported to their task by Talon Helicopters. The Subject had lit a fire and the smoke was spotted from the air. The ground team which spent the night on Gurney creek was approximately 500m downstream from the subject and immediately made contact with the Subject who was mobile and in good shape. He was making his way down Gurney creek to the trailhead when he was located. The Subject and teams were then extracted by Talon and returned to Command.

It appears the hiker descended the wrong drainage and faced numerous terrain traps. This wrong turn caused his delay. A map and compass would have been useful – see our article on the 10 essentials.

In summary:  A good outcome for all concerned.