The team was formed in 1972 after a search on Burke Mountain required a SAR team to be called in from another community. The city felt they needed their own team. Originally comprised of police and fire department personnel, the team is now completely staffed with 50 volunteers.

To date the team has conducted over 650 tasks. During those tasks the team has found 821 lost people, rescued 68 injured people and recovered 61 bodies. Over 65,000 hours have been logged by Coquitlam Search and Rescue Volunteers on tasks and further countless hours on training. 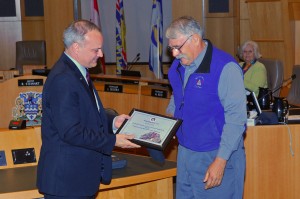 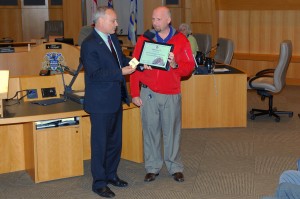 Cook joined the team 35 years ago and retired only recently, however he still assists the team from time to time when requested. In 1982, Dan ran one of the team’s largest searches and served as the team’s first Team Leader (now known as president). Cunnings joined the team 30 years ago and shortly after became a search and rescue manager. Ian’s year of experience in search and rescue resulted in his being hired by the Provincial Emergency Program where he now serves as the Search and Rescue Specialist for Emergency Management BC. 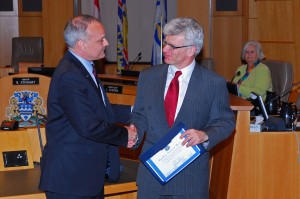 Garry Mancell, accepting a certificate of recognition of 40 years of service to the community on behalf of the team. (photo: Ian Thompson)

Garry Mancell, President of Coquitlam Search and Rescue received the recognition on behalf of the team. “It was a great honor to represent the team for this recognition”, Mancell said. “Being part of this team has been most satisfying. The dedication of each and every member is unlike anything I have been involved in. People are aware of the work we do during a search or rescue but they don’t hear about the hours spent training and honing our skills to be ready. Dan Cook and Ian Cunnings are examples of the years of dedication many of our members of put in. It is an honor to be a part of this team.” 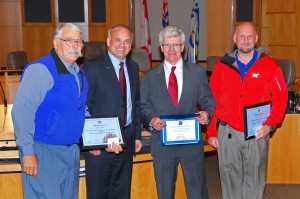 One Response to Coquitlam SAR Recognized for 40 years of service