On Monday, June 11th, Coquitlam SAR was tasked by BC Ambulance Service to rescue an injured motorcycle trials rider in the Belcarra area.  The rider had fallen from his bike, and he suspected he had broken his lower leg.  A rapid response from Coquitlam SAR members in the area saw a team heading up the trail towards the injured rider shortly after the call.  The rider’s partner was extremely helpful with guiding the team and helping carry equipment. 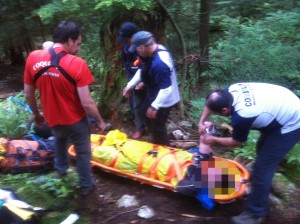 Packaging the patient for transport

Once on scene with the injured rider, two Coquitlam SAR members/Paramedics assessed and treated his injuries. It was confirmed that he had a lower leg fracture, and he was treated accordingly.  As more SAR team members arrived, preparation for a stretcher carry to a nearby gravel road began.  The terrain where this accident occurred was very uneven and the team anticipated a challenging stretcher carry along the single track trail used to access the accident site. 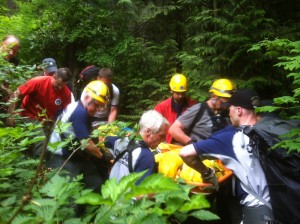 Fortunately, an alternative route to the road was found and the evacuation to the waiting rescue truck went smoothly.  During the evacuation a rope belay was used on the stretcher to assist the rescuers, due to the uneven terrain. 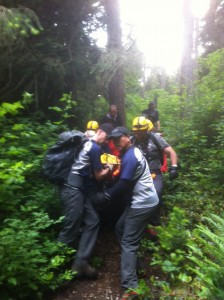 Once at the road the patient was loaded into the rescue truck and driven a short distance to the waiting BC Ambulance Service paramedics. The patient was transported to hospital from there.  All team members returned to command shortly after.

The initial call to 911 came in around 5:30pm and the patient was in the ambulance on the way to hospital by 8:30pm.