On Sunday May 19th, Coquitlam SAR members had just returned from assisting Ridge Meadows SAR in the search for a missing man in Maple Ridge, when we were paged by Coquitlam RCMP at 19:00. Three 23 year old male hikers reported themselves lost. They had been hiking on the Dilly Dally trail out of Buntzen Lake, and had somehow missed the trail due to snow at the top of Eagle Ridge.

Team members responded to Buntzen lake, and Talon Helicopters was asked to fly in to see if we could find them before nightfall.

At approximately the same time, we were paged again by Coquitlam RCMP to respond to a stranded boater in Indian Arm, part of our response area. Due to the nature of the situation on Eagle Ridge, we asked the Coast Guard to handle the marine rescue in order to devote our resources to the first call.

Coquitlam SAR then made use of a prototype software “app” designed by one of our team members to locate missing persons using their smart phones. By sending a message via text (SMS) to the subjects, they load the application and it sends their position back to the SAR managers. The app also let them know that SAR was on it’s way and to expect a helicopter.

The subjects were spotted from the air in a very steep area a long distance from trails on Eagle Ridge, about one third of the way down from the top. Since we could not land near them, the team dropped clothing, food, water and a radio from the helicopter, and proceeded to insert seven SAR members at a landing area on top of the ridge. The team, equipped with ice axes, crampons and ropes, used various mountain rescue techniques to make their way down the ridge through hard and icy snow conditions, to the subject’s location, a process which took about five hours. 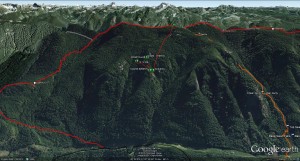 Once with the missing hikers, the decision was made to wait until daylight when we requested North Shore Rescue to execute a long line extraction (HETS) of the 3 lost men and the seven rescuers, and everyone was back at command by 08:00. The subjects indicated that although they had all done this hike before, they had lost the trail in the snow, and had attempted to navigate to where they believed the trail to be. This turned out to be the wrong route, which left them stranded where they were found. They did not have a GPS, and carried minimal equipment with them.

The hikers did call for help early in the process, which made locating them easier than if they had waited until dark, or not called for help at all. 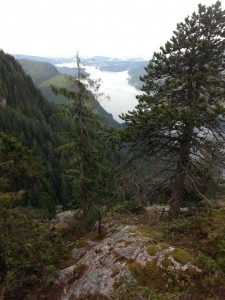 Several weeks of warm weather has melted much of the snowpack, but hikers should be aware that snow lingers on Eagle Ridge well into June, and can obscure trails and trail markers, make for very slow travel, and presents a risk of slip-and-fall injuries. We would also like to remind people that navigation items such as a wilderness GPS, a map and a compas, along with knowing how to use them, can make finding your way much easier. Remember to always take enough clothing and food to handle an emergency, and to call for help early when you know you are lost.

Coquitlam SAR would like to thank Ridge Meadows SAR, North Shore Rescue, and Talon Helicopters, especially pilot Kelsey Wheeler who was working on his birthday.

2 Responses to Rescue on Eagle Ridge