Many Coquitlam SAR members attended SARScene last weekend, meeting with several hundred SAR volunteers, professionals, SARTechs, industry and government in Canada’s Annual SAR conference. Delegates from every province, marine, air and ground SAR units, and eminent speakers from the US, the UK and other international experts attended to exchange ideas and information on how to make SAR better.

Read more about the conference and it’s impact on SAR.

Coquitlam SAR manager Michael Coyle spoke at two sessions related to the use of Technology in Search and Rescue along with other experts in the field. In the first, on integrating technology, Rick Laing from Ridge Meadows, Paul Toupin from Central Okanagan SAR, Peter Anderson and Steven Brahm, both from SFU spoke on mapping, communications, and other issues related to the use of technology. In the second session, he joined Ashley Spilak, the EMBC Social Media expert, Julie Toddington from Central Fraser Valley SAR and principal at Toddington International, and Colin Weibe, Vice President of BCSARA, member of Central Fraser Valley SAR, and Abbotsford Police officer spoke on Social Media and its application to SAR operationally and organizationally. 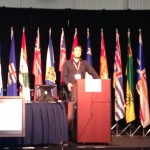 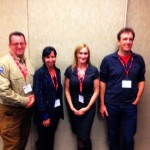 Mike also highlighted Coquitlam SAR’s considerable work in developing our Social Media policy, which we have made available to the SAR community as an example.

In a pre-conference session, Coquitlam SAR’s work at pioneering the operational use of UAVs in SAR was discussed with a group of UAV operators, experts and SAR subject matter experts including representatives from North Guardian UAV Services and a very impressive group from the Burns Lake area who work with Burns Lake SAR (WI-RC UAV camera platforms). The inclusion of representatives from Transport Canada, military and provincial agencies made this a very informative and productive discussion.

Four members of the team entered the SAR Games, an annual competition held at SARScene where groups from anywhere in the world enter into a friendly competition on basic SAR skills such as first aid, team work, navigation, survival skills and search theory. At the last SARScene held in BC, Coquitlam placed best all volunteer SAR team, but this year it was not to be. After a very healthy and exciting competition in which the lead was swapped several times, the excellent skills of Nelson SAR paid off, winning them first place, followed by Prince George SAR. Coquitlam SAR placed third, winning the bronze medals, cheered on by many supporters from our team.

It’s worth mentioning that the team received bonus points in the slope rescue station, an several judges commented on their high level of teamwork. 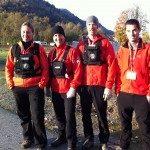 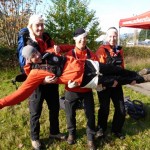 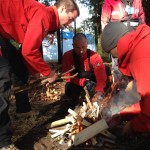 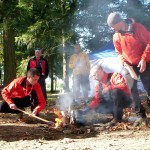 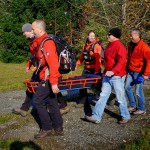 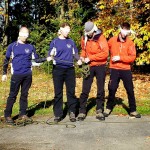 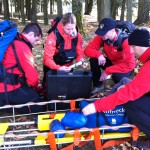 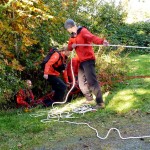 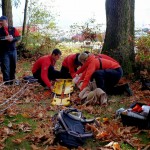 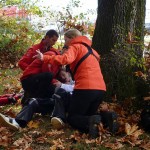 Finally, at the awards banquet, the Exemplary Service award was presented posthumously to the Webb Family, and accepted by Abbie Webb, Rollie’s Daughter. In attendance were Sean Webb, Rollie’s brother, Rollie Webb Senior, his father, and Ethan Webb his son. There were not too many dry eyes in the house for the presentation. 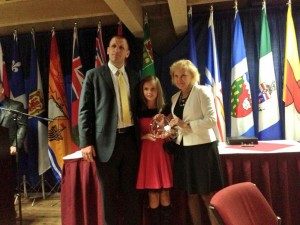 Coquitlam SAR is fortunate to have such dedicated volunteers working for the team, and devoting additional time to attending SARScene, and competing in the games. The work done at this conference is of incredible value to the SAR community, as we cannot solve the large problems as individual teams.