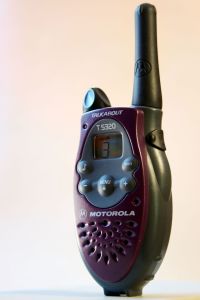 At 9:15 PM on Wednesday November 26th, Coquitlam SAR was informed of a medical rescue on Burke Mountain.

A member of the public, a HAM radio operator, was scanning frequencies when he heard a distress call on an FRS Radio (also known as the Family Radio Service) frequency. The caller said his name and that he was injured. He claimed to have been riding a dirt bike, and gave his location as being approximately 500m up the trail from the gate near the Port Coquitlam Hunting and Fishing club (the gun club) on Burke Mountain. The RCMP were notified, and SAR was activated.

Given the nature of the emergency the team activated all available resources, including two of our paramedics, hypothermia equipment, off road vehicles, and over 30 of our members. By 10PM the team was scouring trails in a radius of 3km near the gun club in torrential rain, fog and low temperatures.

At the same time, the search for the missing person continued by other means at Command; the caller had only supplied a name, and no address or phone number. Using the name, SAR managers were able to track several social media accounts of a Coquitlam resident who had a similar name. Using software written by a member of the team, the managers were able to determine the person was a Coquitlam local, and a probable address. The address was confirmed by the RCMP, and officers were sent to the house while SAR attempted contact via social media.

After searching until 3:30AM, and finding nothing, the team stood down while the RCMP continued to investigate. Early in the morning the next day, the RCMP and SAR Managers managed to contact the Coquitlam resident who we suspected was the missing person; he was ruled out when it was determined he was at home, not lost, and did not ride dirt bikes.

At this point it was noted the the search was unusual for several reasons.

Coquitlam SAR and RCMP continued the search again on Thursday morning, bringing in members of Ridge Meadows SAR for field and management assistance. We also consulted with communications expert Dirk DeJaeger of Chroma Communications for advice on the propagation of radio waves in that area, and attempted to line up some radio direction finding equipment to use should the caller broadcast again.

The area was swept again during the daylight, and with clearing weather. Off trail areas were searched as well as more remote trails, roads, and steep mountain bike trails where it was unlikely that a dirt bike could go.

With nothing found, no further clues as to where to look, and confident that the missing person was not in the area they reported over the radio, the RCMP and Coquitlam SAR have stood down on this search. The RCMP consider this search unfounded, and possibly a hoax.

Coquitlam SAR would like to point out the following to the public.

One Response to Unfounded Search on Burke Mountain