Yesterday afternoon at 13:30 Coquitlam SAR was activated to rescue two lost hikers on the Diez Vistas trail near Buntzen Lake.

The hiker reported that they had lost the trail and did not know where they were. They were cold, it was raining and close to zero degrees. However, Coquitlam RCMP had managed to ping their cell phone (which had a strong signal with good accuracy), giving us a location for the pair.

Due to the cold weather, we activated Talon Helicopters as well as sending ground teams to their location. The helicopter verified their position, but was unable to land. A ground team reached the subjects at close to sunset, supplied them water, food and dry clothes. The two were hiked to a nearby road and driven back to the command post. They were cold but did not require medical attention. 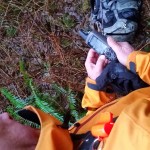 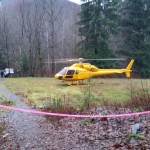 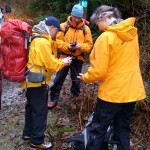 As anyone who has been following our SARElf campaign can tell you, there are a number things you can do to make your backcountry trip safer – including taking a flashlight (among the other 10 essentials). The two hikers rescued yesterday were luckily able to make a phone call, and provide a location – they had conserved the batteries on their cell phones – and made the rescue quite simple. Without the location or phone call, they would have been reported missing much later, and would have required more resources on the part of the SAR team.

With the colder weather and shorter days make sure the plan your trip with lots of extra time – it gets dark and cold very quickly in the winter.

One Response to Lost hikers on Diez Vistas trail