Earlier this summer we wrote about Coquitlam SAR’s ongoing Trail Marking Project – our attempt at preventing SAR call-outs by making sure popular local trails are well marked and mapped.

Combining funding from Coquitlam SAR, Buntzen Lake Wardens (BC Hydro), BC Parks, the Valley Outdoor Association, the Federation of Mountain Clubs of BC (FMCBC) and under the leadership of team member Steve Chapman, we began marking high priority trails in the Buntzen Lake, Eagle Mountain and Burke Mountain areas this summer, and continued into the fall. 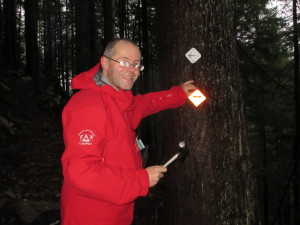 Steve Chapman putting up one of several hundred trail markers.

With last weeks two missing hikers Steve and others on the team noted that the area where they got lost has been problematic for a few other parties, so Steve and Mechthild (both of whom participated in the recent rescue) took it upon themselves to update that section of the trail this weekend. Below is a set of photos from that trail marking session.

Steve and Mechthild both noted that the area is a maze of false trails and that it is very easy to get lost – in fact they recalled rescuing some hikers earlier this year who, when found, had lit a fire to keep warm, not knowing that they were under a trail marker. 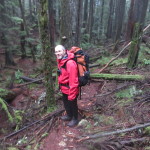 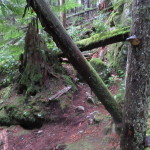 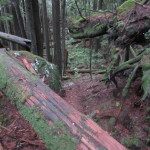 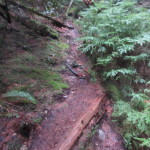 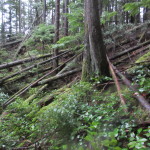 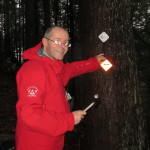 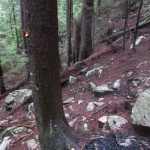 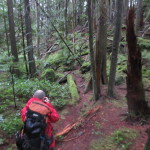