Coquitlam SAR was asked by Coquitlam RCMP to search for a missing hiker/trail runner in the Munro Lake area of Burke Mountain.

The subject, who grew up in Canada but was visiting from South Africa where he is a student  had no knowledge of the area and took no equipment with him except what he was wearing; runners, shorts and a t-shirt.

The Goat trail is a very steep area, and is well known to Coquitlam SAR for the many treacherous gullies and cliff bands where we have rescued stranded and missing hikers in previous years, including a few fatal accidents.

Hoping that the subject had stopped on or near the trail during the night, the team sent two teams of searchers to scour the main trail, Munro Lake, Dennett Lake and the areas near the Cabin trail on Burke Mountain. This initial search, lasting eight hours, failed to find any definitive sign of the subject. As the sun rose on July 7th, we began activating SAR teams from throughout the Metro Vancouver and Fraser Valley area, with members being sent from Kent Harrison, Central Fraser Valley, and Lions Bay SAR, and also activated Talon Helicopters who sent pilot Kelsey Wheeler to assist.

At 07:55, Talon Helicopters flight with two Coquitlam SAR members and one Lions Bay member located the subject in a gulley  approximately 300m to the northeast of the main trail, at an elevation of 900 metres. The subject, waving his shirt frantically, appeared unharmed on the on a ledge with cliffs above and below him. This very precarious position was only a few hundred meters lower on the gulley from a previous rescue several years ago.

Coquitlam SAR  activated North Shore Rescue, who had notified us they were on standby, at 07:59 to perform a long line extraction of the subject.

Their team arrived an hour later at 08:59, rigged the helicopter and were with the subject by 09:56.

The subject was lifted out of the area, and arrived back at command at approximately 10:30 where he was reunited with his family. He was taken to hospital for treatment of minor injuries.

Coquitlam SAR announced our intention of developing the capability for long line rescue within the team in March 2011 after a very careful evaluation of our requirements considering the frequency of our use of the tool, and its impact on the safety of our volunteers. We applied for and were granted funding for the project in October 2011, and commenced our first training program in May of 2012.

Our team trains for many eventualities that never happen. In particular we evaluated the use of all of our rescue techniques over a 10 year period and found that the one rescue tool that was used more often the all of the other technical rescue skills was the long line. Our study, which took several years, noted that the true value of the long line technique was in the ability to rapidly transport SAR members and equipment to and from rescue sites. The effect is dramatic; faster rescues, decreased exposure to hazard, better results for injured subjects, and most importantly the ability to rapidly respond to and rescue our own volunteers in case of injury while on a task. 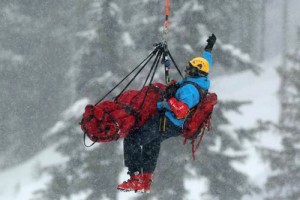 Our knowledge of the long line rescue technique goes back to 2004 when two members of Coquitlam SAR were first trained through the Mountain Rescue Training Program. In 2006, those members began training and operating in conjunction with North Shore Rescue, having met their stringent requirements, and began performing rescues in Coquitlam, the North Shore and elsewhere in the province when required. In 2010, Nick Zupan and Mike Coyle were chosen to participate in a team of five HETS (long line) rescuers at the downhill ski events during he 2010 Olympics, a testament to their skill. It was during this event that Mike Coyle was activated to rescue American downhill skier Stacey Cook when she crashed in during a training run, and subsequently returned to competition.

Our nine year history of performing and using the long line rescue technique, and our concern for our own dedicated SAR volunteers operating in such a large search area a few kilometres from the third largest city in Canada led us to the conclusion that we had to develop our own expertise.

We have been told by Transport Canada, Emergency Management BC and the equipment manufacturer that the certification necessary to sell us new equipment is very close to being complete, ending a nine month long wait for Coquitlam SAR to have an active long line rescue program.

One Response to Burke Mountain Task