Coquitlam SAR members travel around the world, climbing in the Himalayas, Mount Logan, and competing in rope rescue competitions in Europe, and recently two of our members assisted in a rescue of a fallen climber in the Bugaboos here in BC.

The Bugaboo Mountains near Golden, BC is a world renowned rock climbing destination with many alpine climbing routes on stunning granite spires surrounded by glaciers and snowfields. Over the years many current and former Coquitlam SAR members have climbed in this area, but on this occasion Kyle Skidmore and Mike Gudaitis were present when a climber fell and injured herself. 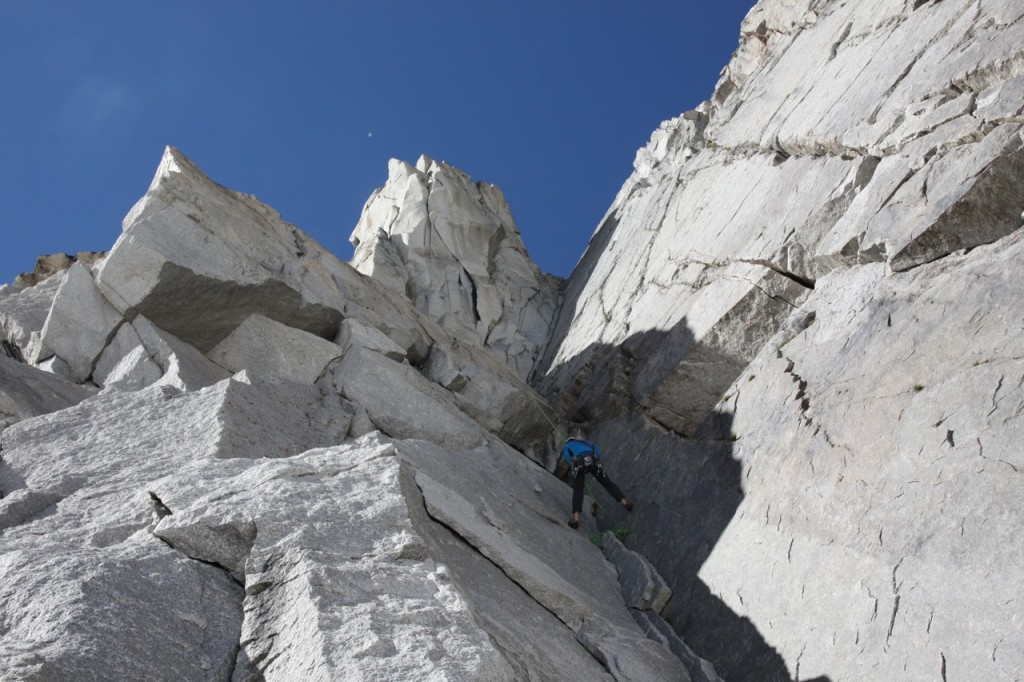 On Sunday June 30, 2013 myself, Mike, and another climber set out to climb the McTech Arête on Crescent Spire from Applebee campground. Before departing the team had discussions with another party climbing in the area (KB and A) who were going to attempt “Paddle Flake”, also on Crescent Spire.

The two parties started climbing around the same time, but were separated by an arête so they could not hear each other.

Around 12:30 a third party (W, J, and T) witnessed A fall, and began to set up on the glacier below to provide assistance. Kyle and Mike, now on the second pitch of their climb, spotted the party below and realized that a climber had fallen on the adjacent route and was injured.

The subject had been climbing in a chimney that was not protectable, and as she was exiting the chimney she fell approximately 20′ above her last and only piece of protection past the belay. Her total fall was between 50-60′. After her fall, her partner lowered her to a large ledge to rest and wait for help.

From the second pitch Kyle and Mike talked to the third party on the glacier and agreed to provide assistance. They had a radio located at the Kain hut ~1 hr away. A member of the third party set off to call for help while two others set up to access the fallen climber. The Coquitlam SAR members rappelled off the route to the steep snow, and the third member of their party continued down to prep a helipad on the glacier.

Kyle built an anchor to lower the injured climber (A) to a safe ledge for Mike (a paramedic) to asses. By this time (~15:00) the third party had reached the subject and began lowering her to Kyle’s stance. The subject was lowered to a ledge, where Mike assessed her injuries, and Kyle continued the lower.

At this point (~15:30) several members of Columbia Valley SAR arrived, flying in Bighorn Helicopters MBB BK117, landed on the glacier and brought a stretcher over to the subject. Columbia Valley SAR and Mike continued packaging and everyone assisted in a stretcher carry to the helicopter where the subject was loaded in and off to Invermere hospital.

The time from when the subject fell to when she arrived at the hospital was ~4 hrs. She sustained a 60′ fall, 15′ to a ledge where she impacted her left hip sustaining a fracture, a serious injury. This is a very remote area with no cell phone coverage. Had T not been able to call for help using a radio and talking to CMH this rescue might not have been completed that day. It is not uncommon to have rescues in this area take multiple days. 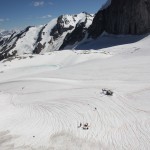 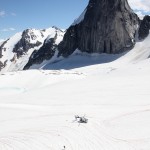 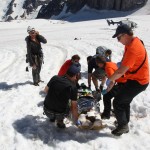 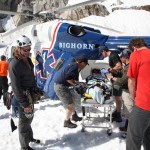 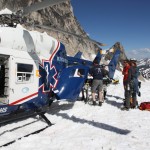 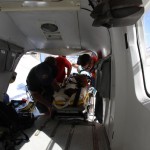 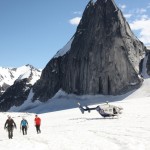 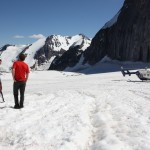 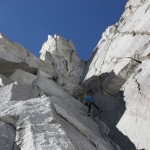 During the rescue, Mike gave the subject his climbing shoes to keep her feet warm. Unfortunately, his shoes went with the subject to the hospital. The next day Mike and Kyle opted to climb Pigeon Spire, which is possible in mountain boots. The video below shows some of this experience.

One Response to Coquitlam SAR members assist in Bugaboos Rescue