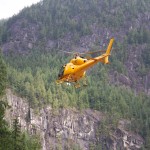 On Monday August 22, 2011 Coquitlam Search and Rescue was activated by the RCMP as a result of a  Personal Locator Beacon (PLB) emergency signal emanating from the Debeck Creek area of the Fools Gold route. The Fools Gold route travels from Squamish to Coquitlam through some of the most remote terrain in south west British Columbia.

The PLB is a device which, when triggered, sends a radio signal to a satellite system that can then triangulate the position of the beacon. The signal also includes a unique identifier which can be used to determine who owns it. The COSPAS-SARSAT system then reports the signal to the nearest authority and contacts the family. Coquitlam SAR was advised by the family that three male hikers from the Tri-Cities area were hiking the fools gold route from Squamish to Coquitlam. The coordinates indicated that they were on the route in  the DeBeck creek drainage. All three hikers were well equipped and experienced. This was good news: we had a firm location, and we knew who they were and what they had on them. The family provided Coquitlam SAR with a detailed trip plan written by the group. 23 separate navigation points were listed, including Lat/Long coordinates, elevation details and local names of features. 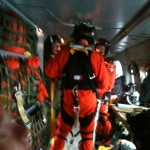 Monday afternoon a CH-109 Cormorant from the 442 Search and Rescue Squadron was sent from Comox to try and make contact with the hikers. The CH-109 is able to operate in some very adverse conditions, and has a winch able to lower SAR techs onto mountain sides. Unfortunately, due to the low cloud cover and high winds, the CH-109 was unable to make contact with the subjects. The CH-109 returned to Coquitlam, landed at Town Centre park, and picked up a team of five Coquitlam SAR volunteers who were then transported to the Debeck Creek mouth at the North end of Pitt Lake.

This turned out to be a first time in a CH-109 for all the Coquitlam members, and the professionalism displayed by the 442 SAR techs and pilots was awe-inspiring. The Cormorant dropped the five members on the beach by winch at around 6pm. The wind generated from the Cormorant was tremendous – enough to knock a person off their feet — definitely wear eye protection if you’re ever going to be under one. It certainly was a trip to remember. 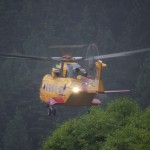 As night was closing in, the plan was to set up a basecamp on the south side of the DeBeck and head up the creek at first light. Fortunately for the team a local cabin owner and son came buy in their boat to see what was going on ~ as the Cormorant attracts attention.  They kindly offered a warm and dry place to sleep to the team – which was accepted of course (twist our rubber arms). Another cabin owner came by to offer good food to the team – the hospitality displayed by the DeBeck creek cabin owners was greatly appreciated. During the evening the coordinates generated by the PLB were updated. The location was moved to the north side of DeBeck creek.

At first light on Tuesday morning, the first in team split – one team of three was to hike in the north side of the DeBeck. The remaining members coordinated operations at the DeBeck Beach site. The weather was supposed to clear, which would allow a helicopter in to access the subjects. Another ground team was sent into the area via RCMP boat. This team was back-up in case the weather didn’t clear ~ to access the subjects and stabilize them until an airlift could occur. The weather played a significant factor in this search as it contributed to the factors causing the rescue and limited the options SAR managers had to effect the rescue.

In addition to the ground team, various other SAR resources were in play, including the RCMP, ground crews on standby and a mountain rescue team at the ready – just in case.

The ground team continued toward the location given by the PLB. The terrain was extremely difficult to travel through. The estimated travel speed of the ground team was only 600m per hour. Uneven terrain, thick bush, large trees and steep cliffs made ground travel very difficult. The difficult travel closely matched similar experiences in the same area during the search for Tyler Wright last year. 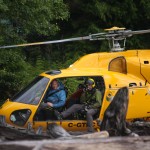 Talon Helicopters, who does the majority of flying for Coquitlam SAR, was able to fly up debeck creek the moment the weather cleared enough to fly.  Kelsey (the pilot) was able to navigate the mountainous terrain in poor weather conditions.  As weather improved, the helicopter was able to get closer to the beacon location. At one point, the helicopter crew was above the location given but due to cloud cover could not see the subjects below.

On board Talon’s Twinstar Eurocopter Coquitlam SAR’s Nick Zupan with the assistance of Tim Jones and Curtis Jones from North Shore Rescue performed the aerial search for the subjects. The helicopter team also used a portable receiver for the 121.5MHz signal the PLB broadcast. This enabled them to further pinpoint the subject’s location ~ as the coordinates had changed significantly over the preceding 24 hours. As the weather continued to clear, the subjects fired a signal flare which enabled the spotters in the helicopter to make visual contact with the stranded hikers at 11:00 ~ at the confluence of DeBeck and Disc Creek. They appeared unharmed.

Due to the steep terrain and difficult location of the hikers, the decision was made to use Helicopter External Transport System (HETS) to access and extract the hikers. At this point, the ground team was 500m away and 100m above the hikers. The combined North Shore Rescue/Coquitlam SAR HETS team extracted the 3 hikers and 3 SAR team members back to the DeBeck Beach by 13:28.

The RCMP provided transport on Pitt Lake and returned the remaining members back to Command which was set up at Grant Narrows where the subject’s family kindly  provided food for all.

The subjects of the search had become stranded on Sunday afternoon by a creek they were unable to cross safely. The rain Sunday evening and extending into Monday caused all creeks in the vicinity to swell, cutting off their retreat. Unable to move forward or backwards on the trail, unaware of how long the rain would continue, and slightly hypothermic from the cold and wet weather, the subjects had reluctantly triggered the PLB to ask for assistance. 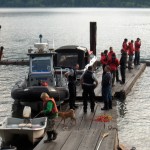 Supporting Coquitlam SAR during this operation was Ridge Meadows SAR, North Shore Rescue, Talon Helicopters, Coquitlam RCMP and 442 Search and Rescue Squadron from Comox. The excellent mutual aid assistance from other SAR teams and agencies  aided to the success of this operation.

The subjects were prepared for the conditions, left a detailed trip plan with family, carried a PLB, and made the decisions to call for help rather than risk a dangerous river crossing.

Note; photos below and elsewhere in this article are courtesy of Michael Buchko. All copyrights reside with the original owners of these images, and permission is required for re-use of any kind. 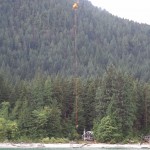 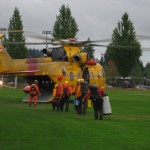 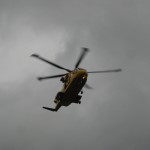 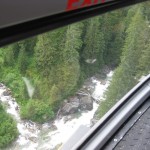 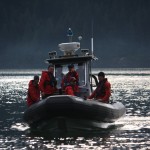 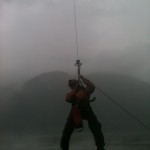 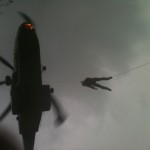