At approximately 18:20 Tuesday evening March 18th, Coquitlam SAR was requested by Coquitlam RCMP to search for two lost hikers who had reported themselves missing on or near the Swan Falls trail near Buntzen Lake.

Our team regularly trains on Tuesday evenings, and eleven members were attending a first aid course at the time. SAR managers rapidly paged the team to divert them from training to this urgent task, and the team responded, setting up command at Buntzen Lake.

Cell phone contact was made with the subjects where a few pointed questions quickly narrowed down the area where they were lost. Unfortunately, coverage and battery life worked against this effort, and only a few facts were gained. The missing women, cousins, 22 and 24 years old, were instructed to stay where they were, to shelter as best they could, and we would find them.

A short helicopter search, hampered by heavy rain, low ceilings and failing daylight did not locate the subjects, and ground crews were sent up the Swan falls trail (the subject’s intended route), and the Halvor Lunden trail (in case they made it further south on Eagle Ridge than they were describing). The lead SAR team on the Swan Falls route, made up of veterans Kyle Skidmore and Cam Girvan and member in training Greg Epp, reached snowline at approximately 800m, where they found a pair of tracks that matched the subject’s descriptions.

These tracks were the best chance to find the subjects. In the face of terrible weather, wind swept ridge tops and falling snow, this lead team tracked the subjects for the next five hours, doggedly sticking to the task after losing and re-finding the route multiple times. Ultimately, the tracks led the searchers to the subjects around 03:00,  seven hours after they had started the search. An outstanding demonstration of Search and Rescue skills.

The subjects were in good shape, but the decision was made to shelter in place while the second team on the Swan Falls trail figured out a better way in to their location, and a faster route back to the trail. The second team laboured on this task for three hours, joining up with the first team and the subjects at 06:00. After resting for a while, and with the sky getting brighter, both groups began moving back to the trail, reaching it at 08:00.

The weather was not suitable for helicopter rescue, so the subjects and the first group of rescuers travelled back down the Swan Falls trail, reaching command at 10:30. Both subjects and rescuers were notably exhausted, and glad to be warm, if not quite dry, after a night out on the mountain. 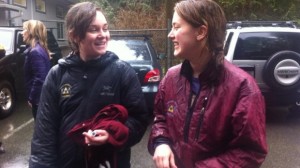 Over 30 members of Coquitlam SAR participated in this rescue, from the teams that searched for and located the pair of hikers, the command staff, searchers who access the trails on the south end of Eagle Ridge, and several of our members in training and resource members.

This rescue is very similar to several that Coquitlam SAR did last year in the same area, three in April and one in June . In each case, hikers lost the trail in the snow, or were delayed by travel on snow. The lesson here is despite spring like weather and warm temperatures, it is still winter in the mountains, and hikers have to be ready for snow until well into June most years.

We’d also like to remind the public to ensure you have the Ten Essentials with you, and to not rely on cell phones in the backcountry, leave a detailed trip plan with a trusted friend.

And lastly, call for help early! It’s easier for us to stop a search than to start one late at night.

One Response to Rescue on Swan Falls