Since our rescue of two young women on the Swan Falls trail two weeks ago, we’ve been tweeting and posting on Facebook under the hashtag #StillWinter. We would like to take some time to explain this further. 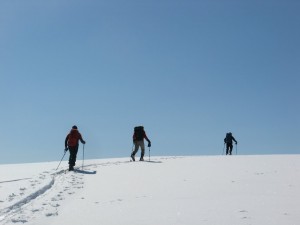 Every year Coquitlam SAR rescues hikers in the period between March and June where the circumstances of the rescue are directly related to people being unprepared for the weather at higher elevations.

Specifically, hikers are not prepared for snow.

In March and April it usually snows on Eagle Ridge and Burke mountain, and the snowpack, usually over 2-3 metres deep, lasts well into June. Trails can be difficult to follow in the snow! The trail markers are either buried, or are obscured by snow covered branches. The trail is not visible, and melting snow can make it very hard to figure out which way to go. Finally, snow makes travel slower, leading to exhausted hikers who make mistakes.

A lost hiker above snowline in the late spring or early summer, and lightly dressed for a warm day, can rapidly succumb to hypothermia. Weather conditions in the spring can fluctuate from sun to rain to snow.

Over a period of three months we rescued twelve individuals who all showed the same pattern of getting lost due to the snow, with about a thousand person-hours being expended. This year we’ve seen our first such rescue of the season, and we’re pretty sure it’s not the last.

The Wilderness Next Door

The mountains around Coquitlam and the Metro Vancouver area are wilderness. They may not be as big, or as impressive as those elsewhere in BC, but they are just as dangerous. A few hours of hiking puts you on the top of Eagle Ridge, most of which is over 1000m, higher than some of the ski hills on the North Shore, and is covered in snow. Eagle Ridge only has three trails that can take you down safely – there is no known access half-way along the trail, and the ridge rapidly turns to very steep cliffs and gullies that are extremely dangerous. There are no roads.

Despite being just next to the third largest city in Canada, it’s the backcountry, and you can’t underestimate it.

Any hiker intending on traversing Eagle Ridge needs to be prepared to navigate with a map and compass, leave time for travelling on snow, and take additional food, clothing, and shelter in case they get lost. In general, every hiker should take the ten essentials, and leave a trip plan with someone responsible.

If you get into trouble on Eagle Ridge, do not go downhill. If you are lost, call for help, and stay where you are.