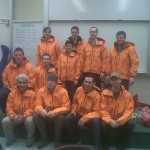 In August of 2009, 17 new members in training were recruited to join the team.  This process involves many hours of instruction and practical experience.  Over the year and half, the MITs completed the GSAR course instructed by Roland Webb and Tai McLavy.

All members in training are now officially full members – voted in and accepted.  The team welcomes the 17 new members,  all of whom have shown dedication and passion as team members and friends.

A very formal meeting was held on March 22, 2011 where the team’s President, Gary Mancel, issued  team jackets to the” former-MITs”.  Pizza was enjoyed by all.

Note: some MITs are absent from this photo.