Rescue on the Goat Trail

At 12:12 on Monday Coquitlam SAR was asked by BCAS to assist in the rescue of what was reported as an injured hiker on the Munro Lake Trail, which is known locally as the “Goat Trail”, on Burke Mountain. Coquitlam Fire Rescue was also responding, and Coquitlam SAR initially attended in order to back up the fire department. 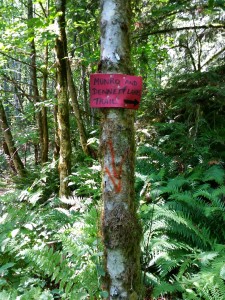 On arriving on scene however, it was discovered that the subject was in fact rock climbing on a crag in the area, and was at the top of the crag. Coquitlam Fire took on the rope rescue portion, packaging and lowering the woman in her 30’s, who had a knee injury and could not walk. Coquitlam SAR took on the stretcher transport portion of the task, assisted by a tag-line technique on steeper portions of the trail. 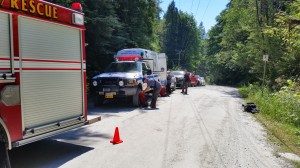 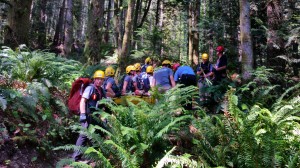 Stretcher transport on the Goat Trail